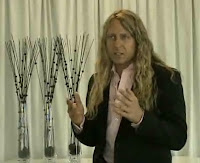 I had the opportunity recently to have a text exchange (read: questions by email - the interview style of the time pressed blogger) with Jake Larsen, head of the Nokia Music Store (Middle East & Africa). I was interested in how the Music Store has been doing post launch as it always takes a while for these things to get going. And, given time, we should get more devices onto the market within reach of more South Africans - enabling a true test of the iTunes equivalent. This interview on the back of the "Comes With Music" release...

If you'd like to see the golden-locked exec in action - there's a nice, albeit slightly clean cut interview on Ovi about the launch and how the Music Store fits into the African mix.

1. Nokia Music Store. How has the take up been in South Africa?

The Nokia Music Store has been received extremely well in South Africa and we are very happy with the performance so far. The South African public have been asking for a large and easy to use music store like this for a long time, and the trusted Nokia brand has meant that we have been able to satisfy this need whilst providing the reassurance that they are supporting a service that not only provides the best possible user experience, but also contributes to the development and long term interests of artists and the music industry.

2. Do you have any demographics of active users? Or any statistics that are for release?

An interesting trend that we are seeing is that about a third of all downloads are happening over the air, which is very promising as it indicates an increase in mobile usage which is crucial in areas with low levels of fixed line internet penetration. We have also found that offering great South African music is a key success factor. The single; She Always Gets What She Wants by local rockers Prime Circle, for example, has been in the top ten of the singles download chart since the launch of the Nokia Music Store in South Africa, which clearly indicates the popularity of locally produced material.

3. A little bird told me there are no more than 30,000 iPhones in SA. We all know the app store is awful and the music store doesn't exist. Mobile in Africa is a volume game and Apple don't seem to get it, or care. What approach as Nokia Music Store taken to get into this extremely valuable, yet very polarised market?

We have just announced that the Comes With Music service is available in South Africa from September 2009. Comes With Music is perfectly suited to facilitate the mass adoption of digital music in the country as its model provides the means for people to legally download all the music they want from the catalogue of more than 5 million songs on the Nokia Music Store, for 12 months, without having to pay for individual songs. We believe that Comes With Music, on the Nokia Music Store, will fundamentally alter the way that music is explored, discovered and consumed in South Africa.

4. Have you used any social media elements in launching, marketing and maintaining the music store? How are these working for you as opposed to more traditional marketing methods?

We have employed various social media elements across numerous platforms including a well supported Facebook group and Facebook marketing, a Myspace landing page ownership campaign and constant Twitter updates. One of the benefits of using social media alongside more traditional methods is that we are provided with a means for communicating with our customers instantly, and can not only inform our users of store related developments in real-time, but are also able to tailor our approach to changing conditions as they develop, which is fantastic in the fast moving entertainment world.

1. This one is going to get me into trouble. But. Prime Circle being in the top 10 indicates to me that the Music Store hasn't quite penetrated past white suburbia. It has been a long mourned fact that the market for rock in this country is tiny. As much awesome talent (and full props to Prime Circle) as we can produce, they're just not moving the records they would elsewhere. To be fair though, this could also be a fact of Nokia's sponsorship of one of the Highveld Stereo countdown charts.

2. Nokia Music Store's Twitter account shows around 500 followers and they got back to me "same day". Pretty impressive as I know how bloody hard these things are to run. Facebook Group looks pretty active, just under 1000 members. As with all social media in this country - numbers aren't everything, and take time to grow. What is a good number though? Mmmm. Another question for another post for another time.

3. If this blog was more musically inclined, I'd take Jake up on the royalties issue, and try figure out whether artists are getting a fair share of the income. It isn't, so I won't. The very concept of download-as-much-as-you-can-in-a-year should do wonders for the music industry. Let's give Nokia the credit they deserve.

Thank ya Jake. I'm off to play with the Music Store myself. Saw a great South African band the other day, Evolver, and I'll see if I can pitch in and buy there album.