Opportunity arose quite fortuitously to do a post around Soccer. Just been notified of a pretty funky event available to Joburg Soccer Fans happening at Zoo Lake on 29 & 30 March 2014. Remember the Fan Parks from the World Cup? Yup. Sounds like that.

Firstly. I loved the Fan Parks during the World Cup. They were the most diverse, exciting and vibey places to watch soccer. Even though it was freezing cold. They also served beer by the case. Which helps.

Secondly. I've been having some Premier League Football jealously of late. I've never really been an ardent soccer support - and having seen the emotional journey that most Liverpool fans have gone through of late (I'm told it's been a quarter of a century since they've had a pip at winning the Premiuer League *ducks!*) - I've been thinking of adopting a team.

Problem is, my mates support Liverpool. Almost all of them. If pressed, I've always said I support Manchester United (which is not a great social intro I've learned). But that's only because, when I was younger and got my first TV, the only station which showed soccer was ETV. And the only games they showed were Manchester United games. So I thought, ag ok, the red team looks cool. That's a flimsy connection at best. Although I'll certainly never have the "I've supported Liverpool since birth, bru, and I cry every time I see the stadium, bru" back story. Perhaps it is time to pick a team. And Man U are, well, not that interesting of late - haha!

Thirdly. Sitting on the board and advising PUNTR has got me a lot closer to the soccer fraternity and trying to understand what makes this game the powerhouse it is. PUNTR is a sports prediction game played while watching soccer on TV. It's a helluva lotta fun. And early testing has definitely shown that we're playing in the "experiential space". Trying to add a layer to those watching a game. It doesn't work with the uber-fans, they're too wrapped up in the action. But for the next tier of fans, it's all about experience. The type of experience a "Fan Park" achieves. Have subsequently popped a mail off to the PUNTR team to see if that can start some player groups. They'll buy the beers. Chat to them on @playpuntr if you're keen :)

So without further ado, here's all the official info, including what games, where, when and how: 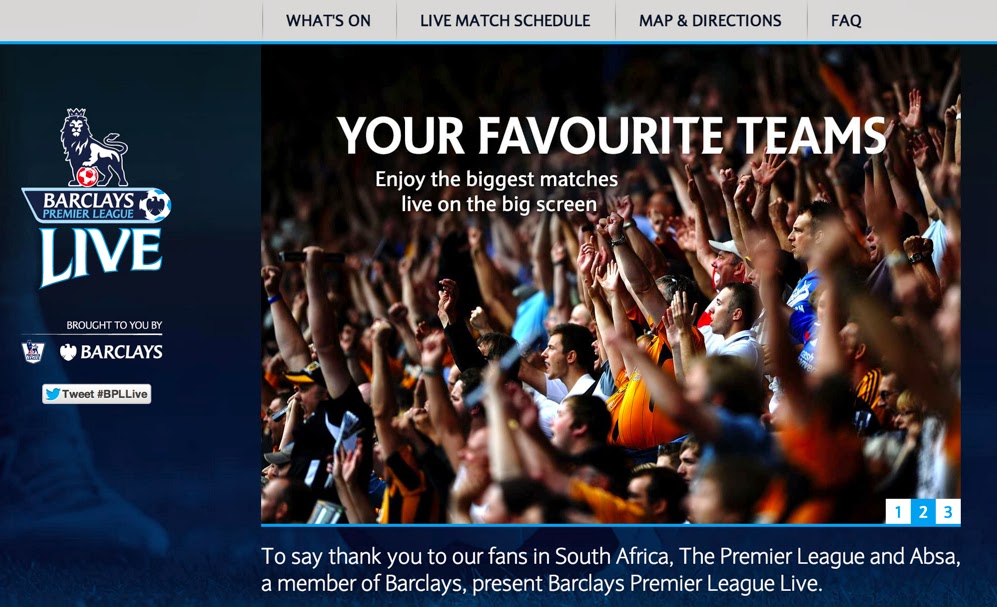 South African fans will get a taste of the English Premier League thanks a two-day fan park that will be opened in Johannesburg at the end of March.Five matches, including Arsenal v Manchester City, will be broadcast live on a giant screen on the 29th and 30th March.

The free event, which is being held for the first time, will host 12,000 fans each day at Zoo Lake Sports Club. Supporters will also get the chance to meet former Bafana Bafana stars Mark Fish and Lucas Radebe.

In addition, former Liverpool striker Robbie Fowler and ex-Chelsea and France captain Marcel Desailly will be in attendance at the event which is the firstFans will also have the opportunity to have their picture taken with the Premier League trophy.

South Africa and Everton star Steven Pienaar, who grew up in Johannesburg, said: "South African fans are very passionate about their football and this is a great way for them to watch the Premier League."I am sure the people will embrace it and it will be another special sporting occasion in my country."

Admission will be on a first-come, first-served basis, with the site opening at 12:00 (local time) and Saturday's first game - featuring champions Manchester United against Aston Villa - will be shown live on a 100m square screen (the biggest in South Africa) from 14:45.


As well as watching the games, fans can showcase their own skills in 'The Pitch Zone' where they can test their accuracy, close control and shooting power.

South African fans can keep up with the latest developments about Barclays Premier League Live at the website and should also look out for Twitter updates.


[Disclaimer: The announcement of the event is a sponsored post. My thoughts around it and other things soccer related are not. So wah!]
Email Post
Labels: events johannesburg soccer