Latest press release about Real Time Wine. Thought I'd share with all ya wine punters who read my blog. Some interesting stats about traction and more specifically - the kind of things we're starting to aggregate out of the data. Hope you've downloaded the app and registered! 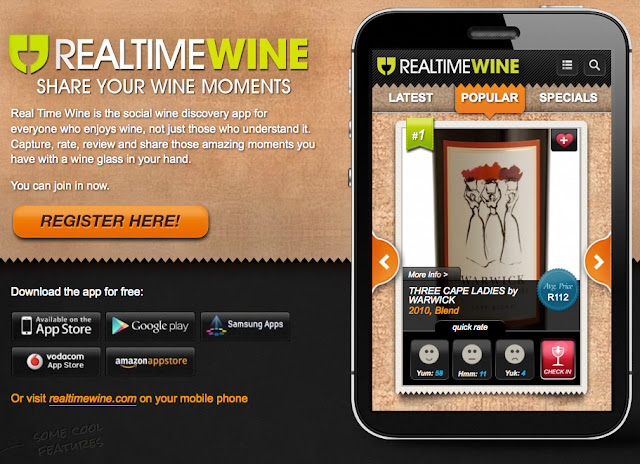 With the popularity of social media platforms such as Facebook and Twitter at an all-time high, South African consumers are increasingly relying on the opinions and recommendations of their peers when it comes to making purchasing decisions.

The wide availability of online forums and blogging networks has given the average South African a voice, enabling members of a growing online community to source informationabout various products and services from those with similar backgrounds, interests and tastes.

The astonishing popularity of the recently launched crowd-sourced wine rating application, Real Time Wine, clearly reflects this emerging trend. The app, which allows users to share their ratings and reviews of various wines, has already been downloaded more than 4,500 times since its launch in July 2012.

“Not only does this application offer South Africa’s wine lovers an avenue through which to express their opinions, but also makes the sometimes daunting task of deciding which wine to buy decidedly less difficult,” explains Real Time Wine founder, Andy Hadfield. “Our rapidly expanding community is starting to generate information that is really useful for theaverage wine drinker, who can now easily identify the country’s most popular wines, based on aggregated reviews rather than panels and guides.”

In an effort to ensure that the app remains relatable, industry jargon and clichéd terminology have been banned. Choice phrases like ‘sweaty saddle’ and ‘integrated tannins’ are blocked by the app, which offers users handy alternative suggestions.

“We want real opinions from real people,” says Hadfield. “You check into the wine you’re drinking and leave a comment. We then share that with the community. This data drives the “trending list” and also populates a personal profile for each member. Finally, you can figure out what your actual favourite farms and varietals are!”

In the 4 months since the application launched, it has already generated over 3,000 reviews from approximately 1,600 registered reviewers. The app’s unique and playful rating scale, which allows users to classify wines as ‘Yum’, ‘Hmm’ or ‘Yuk’, has also proven exceptionally popular, with 7,000 ratings having been captured to date.

“We’ve seen incredible traction over the past few months, with over 2,000 unique wines already reviewed or rated,” says Hadfield. “The level at which people are using the application is incredible, and their involvement is allowing us to provide more and more added value in return.”

Among the application’s key offerings is a weekly shopping list, which is updated each Friday based on the most popular wines of the week. A location-based specials search is also in the works, which will allow users to identify which wines are available at discounted rates in their area.

“We’re constantly working to make Real Time Wine more engaging and fun for our users,” explains Hadfield. “We’ve heard the voice of the people, and we’re quickly starting to see what South African wine drinkers really think, what their price points are and what makes them choose certain wines. We’re working to incorporate all this information into the application, so watch this space as there’s plenty more to come.”

For more information, visit http://realtimewine.com, or join the conversation on Facebook, Twitter or the Real Time Wine blog.

To download for Android from the Google PlayStore, head to https://play.google.com/store/apps/details?id=com.real_time_wine

The website has been specially optimised for Blackberry – to access this, direct your Blackberry browser to http://realtimewine.com