This press release found it's way into my InBox the other day - and piqued my interest: Water Financial. From what I can gather, this is early stage outreach to crowd fund a South African "bank" or financial enterprise that will finance socially, culturally or environmentally focused businesses. That's interesting on many levels. 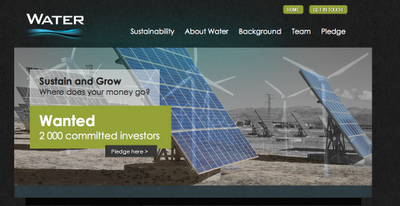 My immediate questions, and why I'll be watching this project:


Aw hell, I just like innovative projects. Is it just me, or are we seeing a LOT more buzz around the local tech startup space? Exciting times. I've pledged R1000 - you should too if you've got some spare ZARS.

Cape Town, July 29, 2011 -- A project to establish a unique South African financial services company was announced here today with the launch of Water Financial, an organisation aimed at financing socially, environmentally or culturally-focused enterprises. Utilizing a "crowd-funding" model for initial capital, Water Financial is attempting to raise angel investment of R 2 million in order to complete the project phase and move to the establishment of a full-service banking proposition.

According to a global survey conducted recently by Ernst & Young, nearly half of South Africans no longer trust their banks, and 96% of customers polled in the survey cited poor service quality as the main reason they would change banks. What's more, a research poll conducted by Water Financial's associate company, Moksha Enterprises, has found that 87.8% of respondents wanted investment and savings products that would make it known to them where their money was being used, while 69.4% of respondents said they would deposit savings with a bank where the money was being utilised only in "sustainable" efforts.

Sustainable banking is not a new idea internationally; the 10 best-known sustainable banks in the world already have assets of around US$ 30 billion. Triodos Bank, a European sustainable bank, for example, has built assets under management of US$ 5 billion over several years, with annual growth of 25% and consistent profits. Triodos has 10,000 businesses and projects in its loan book and 200,000 deposit customers.

Water Financial project leader Chris Loker, previously head of retail banking for a South African banking group and COO of an internet bank, believes that sustainable banking is an idea whose time has come in South Africa. "Money, especially savings, is fundamental to the way we live our lives, as much as clean water, electricity, healthcare and education are. A solid banking sector is needed to finance solutions to the real problems we face, especially climate change and poverty. Worldwide, a significant and growing minority of people want to invest their money in a more sustainable future and need organisations to help them do it. We aim to be one of those organisations," he says.

2000 individual investors are being sought to pledge R 1 000 each via the project's website, www.waterfinancial.biz, and collectively, these investors will hold 40% of the entity until launch. Once established, Water Financial expects to channel investment funding into projects such as: a solar panel financing scheme aimed at corporate employees; a timber housing development; an educational community magazine for HIV-positive people and entrepreneurial development education programmes, among others.

According to a report by the Monitor Institute, so-called "impact investments" - social and environmentally oriented investments - could hit US$ 500 billion within the next 5 to 10 years. In South Africa, host of the 17th United Nations Climate Change Conference this year, there is evidence of an increased focus on a local green economy. President Jacob Zuma has urged that the country be developed sustainably, and job creation is seen as one of the key potential benefits. The Industrial Development Corporation (IDC) has estimated that 300 000 jobs could be created in the next 10 years in the renewable energy sector alone.

"South Africa is one of the most financially unequal societies in the world and the time is ripe for investors to understand and feel comfortable about exactly where their money is put to work, without having to forgo commercial returns," says Loker. "As of 2009, there was over R 2 trillion in bank savings and deposit accounts in South Africa, representing over 34.5 million accounts, and this is anticipated to grow by 22% by 2012. The financial services sector has the potential to be a critically important channel for directing capital towards more sustainable projects."