No Regret Friday. Campaign with a cause.

Nice campaign from Mel Attree and the crew - SAB and Goodfellas present No Regret Friday. Of course, designed to get you to think before you drink before you drive. I've certainly been giving this a lot of thought since the sproglet was born. 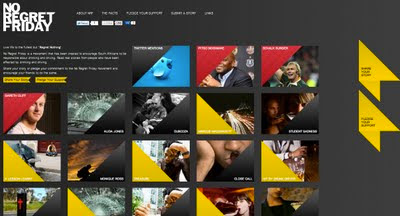 Goodfellas is that drive-you-home-in-your-own-car service - it costs about R200 or so to get home from Sandton to Fourways (for instance, roughly 12km journey). That sounds quite pricey - but it's certainly cheaper than taking a taxi both ways.

It's just not worth it, chaps. We keep telling ourselves as we grow up that "we'll be fine", "we'll take back roads" - etc etc. And come to think of it, I've personally NEVER been pulled over in a roadblock. That's the reason we think like we do - there's a good chance people will get away with it. Saffers can be such bloody-minded and dangerous drunk drivers.

But what if you don't get away with it.

But what if you hit that one honest cop.

Ah, so many people have sprouted drink-and-drive rhetoric, I'm sure everyone's bored of it by now. I don't want to preach. Just go have a look at the campaign. 3 main campaign elements that I can see...