April 04, 2011
Any satire in this country deserves support. It's tricky to get advertisers, you spend a lot of your time trying not to get sued... and hell, we live in a world where all content should be free. The creatives, writers and puppetmakers gotta eat people! 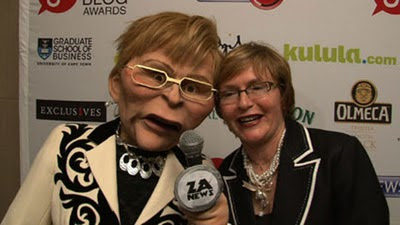 Hop through to IndieGogo (fund raising platform) and donate to a really worth cause (and have fun using a world class crowd-funding platform): http://www.indiegogo.com/ZANEWS-Season-4

Here's the email plea from the Executive Producer...

Subject: Help us make it happen for 'ZANEWS Season 4'

I'm writing to let you know about the delicate situation 'ZANEWS', the satirical puppet show Zapiro (aka Jonathan Shapiro) and I have been producing since 2009, currently finds itself in.

Inspired by cult shows "Spitting Image" and "Les Guignols de l'Info", Jonathan and I developed ZANEWS over a period of 12 years because we were convinced South Africa was ready for - actually in great need of - such a programme, which could send up politicians and celebrities and bring South Africans together through laughter. However mainstream SA broadcasters thought differently, so we decided to take our concept to the internet.

With the support of kulula and the Mail&Guardian, followed by Summit TV and Cape Town TV, we managed to launch, produce 3 seasons, gain fantastic support from millions of connected viewers in SA and overseas, and win several major awards. Despite the accolades and the love from the fans, keeping ZANEWS voice alive has not been plain sailing.

In the conspicuous absence of a mainstream broadcaster and in the current economy, sponsors and advertisers are not exactly throwing money at us. Although we manage to keep our costs at a tiny fraction of what similar shows around the world have to spend, ZANEWS still costs quite a bit to produce and to distribute. A shortfall in our funding this year has forced us to take ZANEWS offline and retire our puppets to their boxes.

While the show is on hold, we have decided to try a new route that many of you have suggested to us and that has successfully been used by a lot of international filmmakers, known as crowdfunding. With the help of Indiegogo.com, we are asking friends and fans to help us bridge the gap and bring ZANEWS back as soon as possible.

Please take a moment to check the link below to get more information, make a contribution, and receive some really cool perks. Or just show your support by sharing it with your friends. If enough of us get behind it, we can make 'ZANEWS Season 4' happen real soon.

Thanks in advance for your consideration and support.