What your mobile apps say about your personality... 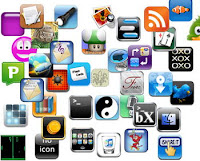 Interesting research coming out of Nokia. I've cut and pasted bits of the press release for you. Not much point in editing as all the juicy info is right here...

The adage “you can tell a person by the contents of their handbag” may have been true once, but now all you really need to understand someone is to know how they use their smartphone. According to Professor Trevor Pinch of Cornell University, the secret to determining someone’s personality lies beneath the apps they’ve installed on their phone.

Based on recent research commissioned by Nokia, society’s relationship with their cell phones has changed significantly. We are now a country of “app dependants” with 65 per cent of smartphone users in South Africa relying on apps to significantly benefit their lives while at home (50 per cent), travelling (13 percent), or at work (20 percent). These figures suggest that apps are being used as important life tools - and as usage levels rise, so does our cell phones ability to learn more about us and become even more useful.

“With so many apps available, people can pick the ones most relevant to them, “Pinch said. “The intimacy we share with our phones stamps our personality onto them. They know our tastes, our needs and even our secrets. If you ever want to really know someone, take a look at their apps – you may be in for a surprise!”

Interestingly, appitypes not only revealed personal traits, but some of our national characteristics too. South Africans are the biggest “connectors” with 45 percent regularly using social networking apps, while the Germans and Indians were revealed as the hardworking and productive “appcentrics.” The Italians were the undisputed “live wires,” with the Brazilians the world’s biggest “creators” with their flair for music and style.

Eighty percent of South African’s sampled have up to 30 apps on their devices, with men more likely than women to download an app (87 per cent vs.79 per cent). The most downloaded and used apps are for social networking followed by music and games which highlights that the majority are used while at home rather than at work.

The research conducted highlighted different South African app trends based on regions. While those in East London and Bloemfontein are keen “socialisers” with the most downloads for social networking apps (55 per cent), Durbanites would rather download games (38 per cent). Those in Port Elizabeth look for assistance with directions with high downloads of travel/navigation apps.

Gauteng residents (69 per cent of them) downloaded apps if they felt they would benefit their lives, while those in Cape Town preferred the free apps (50 per cent).

APPTHUSIAST - Appthusiasts are energetic and passionate. They are social creatures who like to know about the latest trends. They are curious, spontaneous and enjoy being involved in diverse pursuits. Their likes/dislikes are illustrated through the content on their mobile; they download lots of apps and use them a lot. Appthusiasts are rarely without their smartphone, sometimes even taking it to sleep with them!

APPCENTRIC - They are hard working, energetic and productive. They have a lot of contacts, are tech savvy, and know how to make their technology serve them best. They’re conventional and prefer data management, numerical and organizational pursuits. Appcentrics get the most out of the more functional apps on their mobile, which they often use as a pocket-sized computer. While they only download apps occasionally, they frequently use them.

LIVE WIRE - Live Wires are active, down-to-earth people who enjoy technical, outdoor and athletic pursuits. Clever and investigative, they’re sociable, have lots of friends and often seek new experiences and adventures, relishing any challenge. They are reliable and productive and this is reflected in their downloads, which tend to be a mix of health/fitness, social and travel related apps.

CREATOR - These people are creative and imaginative. The creator may be a loner or a team player, but when they socialize they often find themselves the life of the party. As natural storytellers, they will not only rely on the creative capabilities of their mobile, but often use social networking sites. They are up on the latest trends and their creative spirit often drives them to brightly coloured phones, illustrating that they are fun and open minded.

CONNECTOR - The connector is personable, confident and curious. They have an uplifting and motivating personality with a knack for making friends and acquaintances in the online or real world. They have a collection of apps that they use again and again, often carrying fun apps on their phone and apps that may be useful to others. They occasionally download free apps and their app catalogue could do with a refresh.

APPRENTICE - The apprentice is sensitive, kind hearted and independent. They’re inquisitive and clever with a solid circle of friends and a select group of passionate pursuits. Apprentices are interested in downloading apps but don’t know where to start. Don’t be fooled by their shy appearance. There is a wild side just waiting to get out!
Email Post
Labels: app culture industry news mobile nokia personality psychology