Kids, safety and the Internet.

Got a press release the other day that I felt was worth sharing with you chaps... It has to do with privacy and safety concerns of how kids use the Internet. Ever since the initial hoo-hah about what kids can get up to (think NetNanny launching etc) we've become a little complacent. Take a look at this screenshot to jolt yourself into action. I'm not sure what the solution is, but we need to think about this, and talk about it...

The screenshot is from ou.toilet, the mobile based youth network that caused a flutter in South Africa recently. 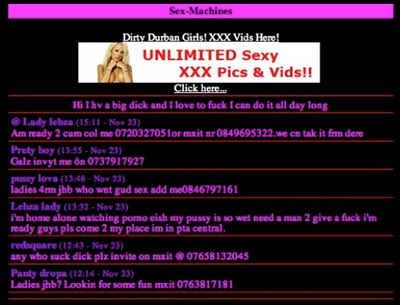 IMPORTANT INFORMATION FROM THE SURVEY

The MSN survey, run by Microsoft as part of Safer Internet Day on 8 February, suggests that nearly half (44%) of children have lied about their age when online; over a third (37%) of those who had been contacted by a stranger (75%) responded; and only 4% told someone older that they trusted, such as a parent or teacher.

What’s more, 39% of children between the ages of 14 and 18 look at websites or play online games that their parents would likely disapprove of, and two-thirds (67%) clear out their browser history to make sure their parents can’t view their online activity.

The survey, looking at the attitudes and behaviours of both parents and children around online safety, was conducted last month across 11 countries, including South Africa, the UK, Ireland, Spain, Finland, Italy, Portugal, Turkey, Russia, Greece and Egypt.