What could the Internet possibly do for a rural township?

What follows is a short summary of the story chronicled on RESERVE B, IT'S OUR STORY.

About 6 years ago, I was lucky enough to take part in a "reality" documentary called S'Camto Groundbreakers III. The idea was to take 6 young, passionate South Africans from various fields and throw them around the world to meet other young people, forge relationships, have experiences and spread our wonderful South African culture. It was a great ride, and being exposed to the SABC 1 audiences and content requirements helped shape who I am today. We very easily slip into our Sandton / DSTV / Western content bubble, and forget that we're an African country, with African culture. Everyone would do well to drive outside the bubble every now and again, just to hit home that point that we have a country of 50 million people, only 5 million of which are connected to the Internet.

Anyhoo, a couple of weeks back, we began shooting the 1 hour sequel to that series. Part of that involved telling our story - where we were 6 years later. It's part of loveLife's bigger "MAKE YOUR MOVE" campaign, showing people who have made theirs. Well, let's hope I've made some kind of move!

Part of the shoot involved us trekking off to Reserve B, a very rural village in Bergville (Drakensberg area, Kwazulu-Natal). The idea was for us to share skills and try give this community a hand-up (not a hand-out). I'm now very fond of that terminology and shall apply it to corporate clients! 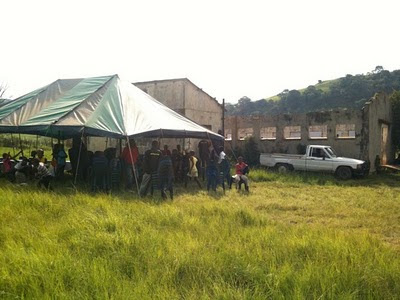 Immediately, the tech field becomes an interesting challenge. When you're dealing with a community that has no toilet paper, 1 water source  (a mechanical tap thing that has to be cranked to get the water out) and a nursery/creche that it literally falling apart... the Internet can't be high on the list of priorities. Or could it?

In the end, it was an incredible story. One of a white boy from the suburbs being exposed to one of the most positive and eager to learn bunch of people that he'd ever met. A story of how something as simple as an email address, can be a connector across rivers of disadvantage. And a story that became more about the village, than it did about me.

If you have a moment, do yourself a favour and scroll back through the posts on the Reserve B site. I set up a very simple Posterous - primarily because the text/image post-from-email function meant that we'd be able to publish our experiences to the Internet almost immediately, from the simplest of mobile devices - with just 1 tiny bar of signal!

It opened my eyes to the possibility of using similar Posterous style sites to enable more people to tell their story. Organisations like loveLife have some incredible experiences as they travel around the country helping empower and educate our youth - perhaps we just found an additional channel to tell them on.

The other "Groundbreakers" had similar projects, just different fields. All went down well. Sershen Naidoo helped modernise up the local vegetable garden. Hloni Modise (budding young rockstar with her own record label at 26) ran some facilitation and musical jam sessions. And Phumzi Ndlovu, also an original member of the cast, and the very reason we knew about Reserve B, was always around to help us navigate and learn more about her beautiful community.

This experience touched me deeply. I hope we can continue to help this continue. And I hope it touches you...
Email Post
Labels: digital divide google lovelife rural scamto groundbreakers tv