The Story of Reserve B (in conjunction with loveLife)

The summary of my recent experiences in Reserve B is available here. This is the journey, as catalogued in tweets, instagrams and pictures. Should make for interesting reading... Thank you to everyone who took part, especially those who sent HELLO emails to welcome Phindo (a Reserve B resident) to the world of email! It was an incredible experience, watching the joy on her face as she connected to the world outside of Bergville and the immediate surroundings...

Visit the site we setup, read the story. It's an important story, of which there are many in this country that remain untold. 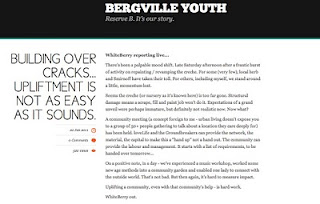 Oh, and in case you're wondering, I AM the Foursquare Mayor of Reserve B. But that means nothing. In reality I was humbled and delighted by its residents.

So I'm off at 5am tomorrow to a rural township in Bergville to see if technology can actually empower people... I'll cover it, as always :)

Off to Bergville for the LoveLife documentary. Director: Mickey. Rad dude. http://twitpic.com/3rx9oc

Heavy debates in the LoveLife van. What does everyone think about the "vaccines cause autism" argument?

1 hour away from Bergville. Will do a tour of the youth reserve before settling down to see if there's anything we can do to help...

The Drakensberg area is so beautiful. Majestic. I'm Instagram'ing this journey, feel free to follow/comment http://twitpic.com/3rylxg

What concerns me: I arrive on the youth reserve, no reception, no feature phones, no money for airtime. Reality check time. #lovelife

On the way to the reserve. Have set up http://bergvilleyouth.posterous.com - to try use email to tell these kids' stories. #lovelife

Imali yeqolo - the free money you get from government for lying on your back (ie teen pregnancy). Yikes. #lovelife #Bergville

I already have a local nickname: Whiteberry. #lovelife #Bergville

Meeting everyone. Going to try use email2posterous to tell this villages story. Have GPRS will blog! #lovelife http://twitpic.com/3s19ld

I've found 2 Internet capable cellphones in Reserve B. That's enough to start! Got www.mymsta.mobi chatting to the guys now. #lovelife

Hearing stories of how useless/disrespectful local ANC gov is in Bergville. Sad. Promises made around elections never followed up #loveLife

Day 2 of the loveLife documentary. Follow us on http://bergvilleyouth.posterous.com (@ Reserve B) http://4sq.com/gFJfQ8

Thando Mazebuko from Reserve B. Dream: become a lawyer. http://instagr.am/p/BI_Mr/

I have been struggling for 2 hours now, trying to get gmail setup on an old Nokia. Utter tech fail! #loveLife #Bergville

Did it. Kinda! The first gMail enabled cellphone in Reserve B... #loveLife http://instagr.am/p/BJKgC/

Phindo with her first gMail enabled cellphone. Thank you to everyone who sent welcome emails! #loveLife http://instagr.am/p/BJTSi/

Life has its moments. Rural Africa. A tent. A roofless building & no jokes, they just broke out the Trance beats http://twitpic.com/3scvqj

Shit. We have a problem. This is the only road into the village #loveLife http://twitpic.com/3smvxu

Road washed away, waited for hours, no better. Had to turn back home. Amazing how a community can be cut off so easily. #loveLife

Heart melted. Just received an email from Phindo in the village. Yesterday, nothing. Today, connected. http://bergvilleyouth.posterous.com