You work so hard at ORM... and still the search results screw ya!

I've been doing a lot of thinking about ORM (Online Reputation Management) recently, especially after a couple of horrible insurance experiences. One with Dial Direct (bunch of spammers) and the other with Outsurance (very friendly when selling, not so friendly when claiming).

You're damned if you do and you're damned if you don't. I truly understand how powerless and frustrated a customer can get when service fails. In both insurance cases, I WAS one of those customers. I also understand that in the eternal pendulum, swinging between "power of brand" and "voice of consumer", there'll also be some dingbats who are never satisfied.

So we work on developing ORM strategies. We try draw that fine line between engagement and service.

And in one of the best case examples of online engagement since the bloody word was invited: 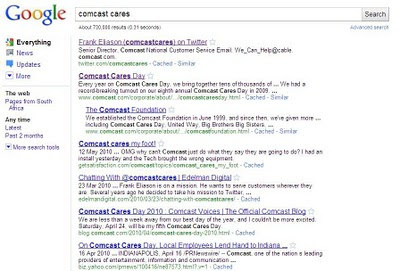 Look what happens! Poor old Comcast (they're the Telkom of the States, so maybe not "poor") has a 4th search result which does a lot to undo all the good reputation management (especially their Twitter presence) they've attempted.

I seriously hope we're not fighting a losing battle. Because if we are... Brands will end up ignoring online complaints (how's Hello Peter doing these days?), customers will end up shouting louder, people will vote with their money (or not) - and nobody wins.