Fleishman South Africa were kind enough to lend me a Nokia N97 for a couple of weeks. This phone was coming into focus for me as an upgrade competitor to the iPhone 3GS. Add to that, a fairly nifty digital marketing campaign and my interest was piqued.

Straight into it then... 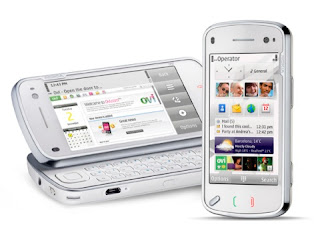 * It's a valiant attempt to integrate a full QWERTY keyboard with a touch interface. The best of both worlds argument may not apply when you have devices like the iPhone - but I maintain, if you type a lot, the iPhone will take some getting used to.

* It comes bundled with a lot of software goodies. JoikuSpot, the regime of uber geeks until now comes bundled with the Nokia N97. It's a little app that turns your phone into the equivalent of a WiFi router (allowing you to connect with your laptop and other devices). That's a nifty tool.

* It has a built in iTrip. Or at least the Nokia equivalent - a piece of hardware that sends an FM signal out, allowing you to pick up music playing on your phone through the car radio.

* Sending an SMS is a breeze. It's one of the only functions where the slide out keyboard and the touch screen work together. Type the text, move your thumb up a couple of centimetres and hit send on the screen.

* The touch screen just doesn't compare to the iPhone. And perhaps it shouldn't be. But this is a touch device that you really have to ruk 'n pluk (translation for foreign visitors - push the hell out of the screen to get a response). Apparently, my geekier cohorts tell me it's something to do with touch sensitive rather than the iPhone's heat sensitive approach. Whatever it is - it doesn't work well.

* It is buggy, buggy, buggy! I don't know why the popularity and penetration of the Internet in the First World has allowed companies to release sub-standard software - but they are. Push down an update and fix it all - yadda yadda. Just not good enough in my book. Firmware updates terrify the man in the street. I expect a phone to work - and the N97 required reboots every couple of days when it would hang while performing everyday functions.

* It's made for right handers. Har har you say? Believe it. The phone doesn't flip to landscape mode when you lift it to your right ear, but if you're affiliated to the left side of your head as I am, you're often forced to wait for a very slow flip-back-to-portrait when asked to "press 1 to continue".

As you can see, I'm a little more verbose on the N97's failures. I was pretty happy to return to my E71 afterwards. Disappointing really, as since the E71, Nokia seems to have lost the plot a bit.

I hear good things about the N900 (or some other such triple digit model). Pity, because even though losing the "techie crowd" really won't dent their sales figures - I used to be a firm Nokia fan, and I'm steadily slipping to Apple Land.

I do enjoy this quote from Arthur Goldstuck...

"My summation: N97 is the phone equivalent of the supermodel who drinks too much champagne. Gorgeous to look at, has some magnificent moves and features, but make her perform in the real world and she falls off the catwalk."
Email Post
Labels: gadget review mobile nokia nokia n97