Nokia E75 review and culmination of "Teach the Technophobe" campaign... 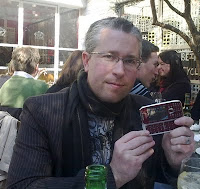 So Challenge 2, 3 and 4 of WOMWorld's Teach the Technophobe Nokia campaign are behind us. Us being the highly techie me, and the not so techie wife.

Challenge 2 was to take a picture and email it. Observe Chantal's handywork to the right. Muchos Bueno.

Challenge 3 was to create an electronic postcard and mail it off. No problemo. In fact, the third challenge gave me a chance to test drive the nifty screenshot function that Nokia has on it's GPS software. Overlap map with satellite, wait 5 to 10 min for the connection (yes, the one drawback) and voila. (Unfortunately we weren't about to pay the ridiculous amount Nokia asks for a Nokia Maps license just for a review phone - otherwise we could've done something a tad more exciting). 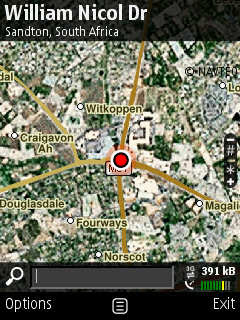 The location of the big soccer ball in the sky. 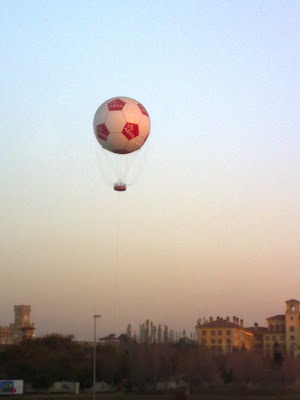 Challenge 4 was a little more interesting. Take a video and post it on the blog. Here, if you'll bear with us - is our completely toasted cat, Dexter.

So there we go. It was a very nifty campaign. Guaranteed a lot of posts from 8 targeted blogs. What it might not have achieved in traffic, it certainly will in SEO. Impressive. Best of all... It was engaging. As simple as the tasks were, it had me playing around, talking to people and really giving the device a good run.

I've got some stats ferreted away somewhere and I'll take a look in the near future to see if we can spot the upturn in WOMWorld's traffic / rankings.

As you can see, I'm a little more interested in the campaign than the phone.

I really didn't like the Nokia E75. At all. It has one redeeming feature - the processor has been given a bump (I think) or something has been optimised because it's considerably faster than my favourite E71. Once you're over the speed it has many flaws...

* The front keypad is sticky with very little of the good tactile stuff that the E71 sported.

* The slide out QWERTY keyboard is OK... But I feel it's a sacrifice in typing speed over the E71. Perhaps I have oddly spaced thumbs.

* There are many software glitches with the software version that shipped. Keys froze, functions on the phone died, odd reboots...

* There is very little screen real estate in comparison to the size of the device.

* But most of all... The Coup de Fail. This is marketed, shipped and touted as an email device. And it's email functionality is GREAT. If you're using simple email. Gmail setup was literally 30 seconds and done. Streaming onto the phone, no problems. Exchange? Never got it working. I've done some research as well, and apparently it's not just me that's battling. Perhaps it's some funny exchange settings - but there's a lot of chatter out there and I have a feeling that a bug fix is in order.

Constructively, I think it has something to do with Exchange servers that are behind a domain. Call me crazy, but I didn't find an option to enter a domain on this version of Mail for Exchange.

The Technophobe's thoughts are slightly different (and have been published in appropriately requested purple... That's the last time I co-blog. Purple is so 2006.

ON FORM: Love it. Think it's compact but has lots of extra shiny stuff. Really like the QWERTY keyboard and the size of the buttons. Not so found of the silver directional pad - it doesn't work very well and has seemed to get worse with use. I don't like slide phones. I do like this.

ON FUNCTION: Love every little thing. After a month of trying to get my Outlook mail working, I did it! Stoke! There doesn't seem to be a lot different to the standard E series, but it's done really well. Oh... and the landscape tilt thingy is really cool.

ON USE: Couple of freezes and glitches. The backlight gave up at one point but has come back to me. Why? Oh why. Otherwise fantastic.

IN GENERAL: Love it! Think it's a sleek, modern update to the Nokia Communicator range.

That's a lotta love. A tale of two users then... You make your pick in the comments. I'm glad to return to my E71. The wife is tearing up a little.

A shout out to the fellow international bloggers that took part in the campaign. Well done guys and gals...