UPDATE (April 2011): I'm seeing some Google traffic coming through on this link - which is unfortunatey considering it's a 2009 blog post! Here are the quick facts for you as of April 2011 according to FaceBook's Ad Demographics tool (please remember these numbers change QUICKLY). Anyone can check them by going to FaceBook and clicking Create Ad (you'll find the link above the actual on page ads). Here we go:

This graph, looking suspiciously like Google Analytics, says there are 1.7 million South Africans on FaceBook. That's pretty damn impressive, considering the latest estimates of our broadband population that I've seen is only in the low 2 millions. 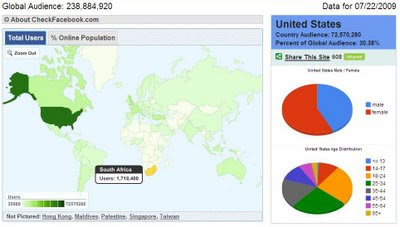 FaceBooks advertising segmentation tool reports similar. Also notice that they've changed the NETWORK demographic to LOCATION. Previously, I think they only counted you if you joined the SA network. Now, perhaps geo-targetting IP's is the way forward... 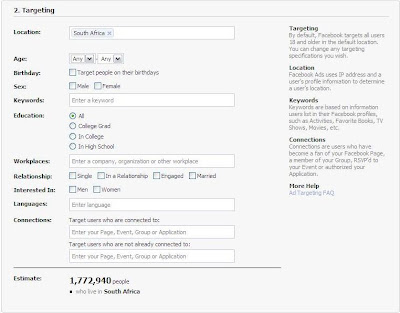 I remember giving a presentation no more than 3 months ago, and looking at stats showing 1.2 million South African's on the social networking site. That's some crazy growth in a country that is so bereft of bandwidth.

Could this be mobile numbers starting to count? FaceBook is pretty accessible on a WAP-enabled phone.