Have PS3. Will be blown away.

Took the plunge to 1080P full HD gaming the other day. I'd been holding off. The PS2 was cool, but I got a bit bored after a year or so. How was the PS3 to fair? Blu-Ray. HD gaming. Wireless controllers. Hmmm.

I'll blog a bit about this as I explore the platform more. But let's say this from the outset. I've played one game: BioShock.

I was BLOWN away.

The experience, quality of graphics and 5.1 Surround is unreal. Whatever doubts I may have had where wiped out in about 10 seconds.

Click on the image below. This is IN GAME footage of the first 3 minutes of BioShock. You suffer a plane crash, land in an ocean amoungst wreckage and are forced to swim for it. It drips realism. Never before have I been entranced by water. 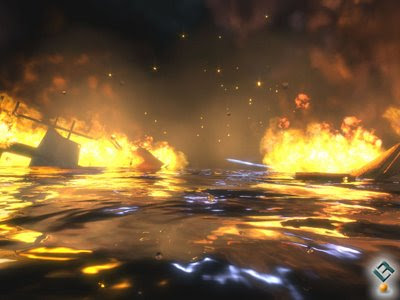