1. The Star runs a cartoon where a lady opens the door, is surprised to see death waiting and says, "Hang on! I've so got to Twitter this!".

2. Finweek runs a front page story telling businessmen that if they're not on Twitter, LinkedIn and FaceBook, they're losing out on serious networking opportunities. 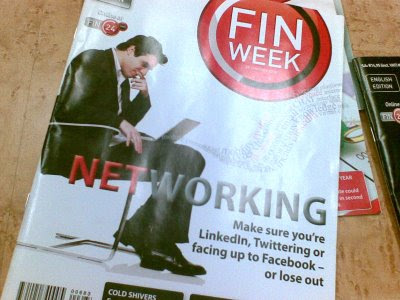 Twitter has always been firmly in the realms of the geeks and the tech industry. I never imagined we have much more than a couple of thousand local Twitter users. Perhaps times are a changin'.