America does it, so why can't we. Leo Laporte and Kevin Rose became embroiled in a humorous and sometimes overly geeky race to 50,000 followers on Twitter. I think our local scene warrants a bit of attention. While estimates range from only 700 to 1500 South African Twitterers in total, the recent FNB Premier Banking campaign saw some really good results when using Twitter as a medium to engage a niche portion of SA's tech audience.

I heard an interesting discussion on TWIT today about how Barack Obama could use Twitter to continue engaging the American public as he did throughout the campaign. Imagine the possibilities. It wouldn't be 100,000 followers like he has now. A presidential Tweeter could garner millions of followers.

Interesting times for a medium that appears entirely vacuous on the surface.

And so, without further ado, I humbly present the GREAT SOUTH AFRICAN TWITTER RACE - Part 1! It's a race to see which South African has the most followers on Twitter...

T's & C's: All information gleaned from Twitterholic (Visit the link for official confirmation of results). Andy Hadfield makes no representation that these figures are accurate. He just thinks they're cool. Andy Hadfield also waives the public's right to call him a circle jerker - and hopes that the world will join Twitter so the pioneering few don't have to take so much flack!

Please note: The results are taken from a search using "South Africa". There are plenty top SA Twittererers that haven't updated their location yet. Get in the game people. 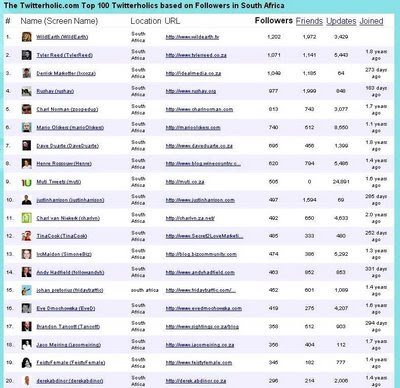 COMMENTARY: And they're away it's off the clappers as almost unknown but entirely innovative Wild Earth takes a substantial lead all credit to the team they must be giving it 110% and as the field spreads we get a chance to look at web wunderkids Tyler Reed and Charl Norman as they cement their places in the top 5 and a bit further down the field we see startup kid turned uni professor Dave Duarte in hot pursuit while HOLD THE PHONES who's this newcomer it's Tina Cook is she a Mom a blogger a spammer who knows but number 12 in SA is no mean feat [breath] BizCommunity / I-tweet-about-gym glam lady Simone Puterman straight after followed by writer of this blog post Andy Hadfield who probably wishes he wasn't in this list as the circle jerk paraders cry like vulture's for his egotistical head more about that later as Eve No-One-Can-Spell-Her-Surname and ex-Quirk turned banker Jaco Meiring bring up the rear while Derek Abdinor just clings onto fame and fortune [breath] notable exceptions from this list include drummer boy Mike Stopforth, SA's proudest man in an e-marketing textbook Rob Stokes and glory boy Jimmy-Wales-crashed-my-website Matthew Buckland [breath] watch out for SpringLeap, Gino Cosme and Bad Mommy in the next race because everyone likes a Bad Mommy thank you for listening good night and good luck. [breath]

No SuperSport presenters were hurt in the making of this blog post. Except maybe Trevor Quirk. But I'm sure he deserved it.
Email Post
Labels: industry news south africa twitter