Congratulations to the winner of the FNB Premier Banking IdeaBounty brief...

December 17, 2008
Mons Guillaume Martin from fair Paris! Congratulations... Hopefully we can stay in touch as we try to roll the idea out next year. 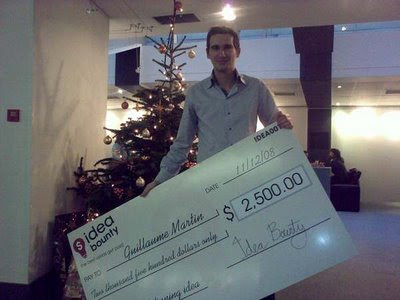 His full interview on the IdeaBounty blog here. Interesting excerpts below:

First and foremost, congratulations on winning our very first Bounty. Did you think you had the winning Idea?

I first submitted two ideas, that I wasn’t very happy with. Creatively they were ok, but both of them could have been potentially dangerous for the image of “real” bank offices. It’s only when I decided not to bother with the finalized creative execution that I came to a third, lastminute idea. An idea that was much too simple to win, I thought.

So I had already prepared some good excuses... You know, like, “anyway it wasn’t the right client for us”, or “we’re going to pitch a much bigger competitor soon”….

You are living in Paris at the moment. Do you have a few secret spots you go to find inspiration?

In Paris, just like in any other city, there’s nothing more insightful than keeping an ear open when dining out. I guess food makes people confident and talkative.

If you can’t afford to come and have dinner in Paris in these crisis-hit times though, everything you’ve ever wanted to know about Parisians and their obsessions is available on “Stuffs Parisians Like”. Very funny and (almost) true.

Be honest, how long did you spend on your winning Idea?

Much less than on the losing ones ! Once you have a solid strategic process, ideas often come more fluently - and harmlessly.

The last question/answer was the most intriguing. I have had a constant thought battle going on about the:

But good to note that Guillaume speaks about a solid strategic process. Get your thinking straight first, and the ideas will flow. Good learnings for budding strategists out there.