The brief allows the broader "creative" web community to pitch in on the How Can We Help You proposition, by coming up with ideas to switch customers to the Online Banking channel. 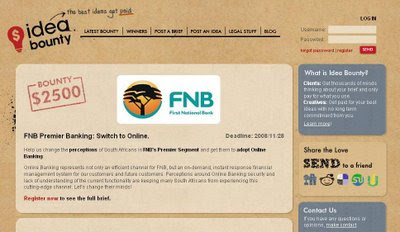 I'd be extremely interested in your thoughts! Leave them in the comments below...

Quirk eMarketing has launched www.ideabounty.com, a website that allows brands to post a brief asking for creative ideas and a reward (or Bounty) for the best submission. FNB Premier Banking is hosting the first brief with a bounty of $2500.

The traditional model for purchasing creative output, in the form of creative expertise and ideas, has dictated that a brand pay based on how many people and hours have been used to create the end product. So it’s rare that a budget allows for more than two or three resources to be allocated to solving a brief. “In this model, injecting new energy and diverse thinking by using hundreds of hungry experts, would mean the costs grow exponentially,” says Stokes.

Idea Bounty is based on the principles of crowdsourcing, as coined by Jeff Howe in his June 2006 article in WIRED magazine. It is the process of appealing to the general public in an open forum to reach a goal as an alternative to delegating the task to an employee or outsourcing to a specific third party

“It’s very important that we allow Idea Bounty users to set the value of an idea upfront. Creatives who contribute ideas do so knowing what their idea is potentially worth. We have established legal protection of the idea exchange ensuring creative’s retain ownership of their ideas until they are paid for them. We have to be conscious of exploiting the crowd so we ask for ideas, not finished work. You can’t expect people to devote hours and days of work without compensation.” says Stokes.

Idea Bounty represents a new way for clients to source creative solutions and the team say that their solution is risk free for clients.

“Clients only pay for ideas they choose to use, and if no ideas are used, no money is paid. We are really confident in the diverse and surprising thinking Idea Bounty will deliver for clients. We want brave clients and so far the response has been fantastic. We are launching with a fantastic brand that really gets the web so we’re excited.”

“Banks are there to respond to the needs of their customer base. Crowd-sourcing is an ideal way to involve our customers in the development of new value propositions, and takes the “How can we help you?” proposition to another level.” said Robert Keip, CEO FNB Premier Banking, of their involvement with the project.

Anyone can register to submit ideas and with a $2500 Bounty set for the first brief from FNB, the response is set to be good.