Found this interesting... yet another example of social media being considered a viable facet of a marketing strategy.

Lenovo has sponsored this portal for athlete bloggers at the Olympics. 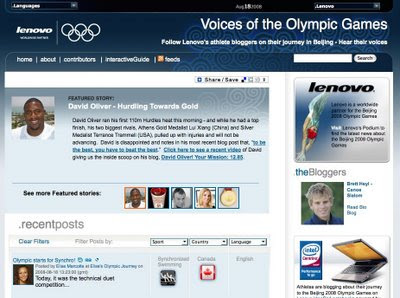 Now. The gold medal question. IS IT SUCCESSFUL!? 207 Twitter followers. Hmm. That's not the only measure. Wonder what the traffic has been like?

Background info from the press release if you're interested:

Lenovo is a Worldwide Partner of the Olympic Games and the Olympic Torch Relay, providing more than 30,000 pieces of computing equipment to manage the operations of the Beijing 2008 Olympic Games. Athletes also will be able to use Lenovo Internet lounges inside the Olympic Village, using PCs to maintain blogs, do e-mail, and surf the Internet.

Until 2008, athletes were allowed to write blogs only until the opening day of the Olympic Games, and could then resume their blogs after the conclusion of the Games. This year, new regulations from the International Olympic Committee enable athletes to write blogs about their experiences off the field of play during the actual 17 days of competition.

“The Beijing 2008 Olympic Games have created the first truly Web 2.0 experience, one in which athletes, fans, supporters and television viewers interact and collaborate over the Internet," said Deepak Advani, Lenovo senior vice president and chief marketing officer. “We want to provide personal computing technology that helps athletes engage with a global community that cares passionately about competition, training, and the kinds of experiences that have gone unheralded until now. We want to help athletes achieve their dreams, and share those dreams with the world."