August 29, 2007
Love it. Independent site owners and publishers lashing out at a bunch of monkeys. For those who don't know, Hello Peter is a local site which allows consumers to publicly rate service delivery of companies. Companies then have an opportunity to respond transparently and get tracked wadda wadda. 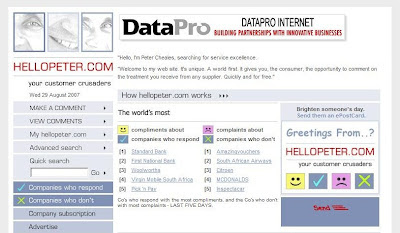 Good on ya Peter and hope you don't mind me reprinting this letter - but if it results in more people being educated as to the tactics of dodgy companies - well, I think we're all winning.

Must really take a long look at Hello Peter. Wonder if its a truly Web 2.0ey interface. Would be good if it was :)

Peter's letter below... Thanks Ingrid for this one...

You’d think by now that Suppliers and their staff wouldn’t take chances with Hellopeter.com. Think about it, we’ve been going for seven years; we’re implementing new and better verification procedures all the time, and we’ve got YOU to tell us when you spot devious and fallacious comments.

Like you drew our attention to a whole lot of Compliments (all of a sudden) about Matrix Warehouse, and sure enough, they were written by foolish employees of the company. Same thing with Bulk Promotions, and as for Amazingvouchers…

You’ll notice that I changed all the “Compliments” to Complaints, exposed the names and contact details of the culprits, and feature them on the Companies Who Don’t list.

Many of you emailed us querying how Amazingvouchers could constantly garner so many Compliments. We checked it out and spoke to the powers that be who assured us that the compliments were from satisfied customers. And they were! Problem was that the staff was telling the customers, “We’ll give you a refund. Just give us a Compliment.” This manipulation has to stop. But it didn’t. Amazingvouchers then encouraged it’s staff by means of a competition to see how many compliments the members of staff could extract from their customers.

Now I have absolutely no problem with customers writing compliments about their suppliers. In fact I love it. The more compliments, the better. But when my site is compromised by unscrupulous suppliers going hell for leather in a bid to whitewash rather dubious sales techniques, that makes me MAD.

While the Amazingvouchers debacle was going on, one of the owners in Cape Town contacted me saying that he’d like to fly me to Cape Town and show me his operation. He added that his P.R. man Marcus Brewster would also be in on the meeting. WOW, what an opportunity! Problem was twofold: I’m not remotely interested in guided tours – the ONLY way I gauge a company’s performance and legitimacy is by what their customers tell me. Secondly, a few years ago, I made an appointment to see Mr. Brewster. I flew down for the meeting only to be met by an employee. No sign of Mr. Brewster. He was sitting comfortably in his office right next door! I was obviously not nearly important enough to be told in advance, “Don’t waste your time flying to Cape Town just to see me. I can’t be bothered to meet with you. At best, I’ll let you speak to one of my employees.” Admittedly, Hellopeter.com was in its infancy, and Marcus Brewster had just finished being a judge on a pop show.

Anyway, point is that I haven’t spent seven years building Hellopeter.com just to have it manipulated and yanked around by people who think they can pull the wool over my eyes, OR YOURS.

We pride ourselves on having nearly 400 of the biggest and BEST companies registered as Companies Who Respond.

So I implore you, PLEASE wherever possible, only use companies who respond on Hellopeter.com. Please don’t give your bank details to ANYONE you don’t know, especially over the telephone. Please continue to report good and bad service. Carry on being our eyes and ears. Tell us when you spot suspect comments.

By the way, I used Satellites R Us for some work at my house because they’re a Company Who Responds. I needed wireless connectivity, and some TV stuff. And they were great. If you’re in the market for PVRs or DSTVs or wireless networks and live in Gauteng, give Hennie a call 078 48 777 97, or 083 875 6847. And report their service on Hellopeter.com!