April 07, 2007
Spotted this on Akopo - what looks like a fairly prominent African and Caribbean Blogging collective/platform.

*How do you view constructions in the cities? Draw for example how you see a town of Africa in 2030 ...

*What will the main roads look like? Will they be covered by panes? Will our cars travel by air? Underground and air-conditioned?

*How will Africans be dressed in 2030 ? What will be the latest fashion?

*Will culinary practices change? Which will be the most current dishes? The same ones as today? Will there be others? If so, which?

*What will cinema halls look like? Will one look at films in large rooms where each one will have his/her ear-phones? Will cinema be in the open air so that everyone looks at films?

*Which traditions and habits will have disappeared because youths no longer support them? *Will one always prohibit that women eat eggs in certain cultures?

*How will schooling take place? Will one learn all alone using a computer? Or using cell phones?

What a great idea. We've been pontificating about how to use the social media platforms in SA, aside from the natural surge of copy wanking. What better than constructing forums of online users and building visions for this continent? Mmm. Tasty. 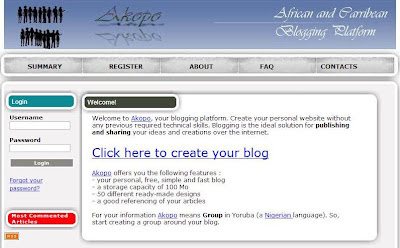 Unfortunately the site doesn't seem to have much up yet - but the idea is new. Good luck to Akopo. Visit the main site here.