Spending corporate bucks for the sake of it? 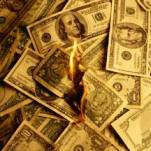 In the age of the hosted app, why are large corporates spending vast sums of money supporting ancient desktop applications?

For the sake of anonymity, I’ll refer to my target as an international medical insurance giant (which recently announced an average contribution jump of 7.9%) and is well respected by many IT players. They are well ahead of their nearest competitors from an infrastructure perspective and can be proud of their track record. But the rabbit hole goes a bit deeper…

Company-wide, there are 4000+ employees all working on the same desktop application. Can you imagine the costs involved for licencing and support? The scenario stands as such:

The same dinosauric strategy has been implemented with their interests in the USA and Great Britain, even when the vast majority of the infrastructure resides in South Africa. In the age of the internet, this shouldn't pose a problem. Unless the application resides client side. But, no, they wouldn’t do that would they? Considering the amount of data traveling between satellite branches / offices / countries? They wouldn’t. Considering the security of said data? No! The cost of bandwidth today? Ah, but they do.

It doesn’t end there… the cherry on the top to address these concerns? Application Virtualisation (expensive IT diarrhea for a solution that allows for a client side application to be executed server side, but controlled remotely). That’s more support, more license fees… and more crashes!

The application virtualisation process re-enforces the question - why is such a well respected company still implementing desktop based client-side applications when SaaS and RIA are clearly the future?

Overall your IT department's cost per customer is greatly reduced. In the meantime, is it their customers that are going to have to bear the brunt of the latest premium increase?