It's about time! Reported a couple of hours ago on CherryFlava - Google Maps has switched on the light in darkest Africa. Darkest, of course, because up till now we have been a fairly insubstantial white blob in the world's most popular online mapping service. 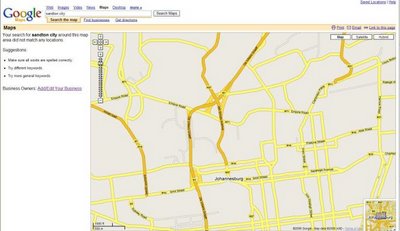 This is important why? Well, it's free of course. And Google Maps has this nifty little interface where you can plugin and geomap any point... gratis. Companies like MapIt and others who have been hoarding this service for a small fortune must be quaking in their map-making boots.

(Apologies for singling out MapIt, but last time I got a quote for some substantial geo-mapping, it worked out cheaper to hand-sketch my crinkly old Book of the Road!)

Expect to see a proliferation of Google Maps chatter in the near future:

It's opened a whole can of mashups (check out the link to the left to be really impressed). The world as we know it...

It's a big event in our fledgling Internet country. Just how it rolls out will remain to be seen. The detail is not quite there - Google seems to have got the main streets right, but nothing to the level of detail they have for the States. We'll get there...

In the mean time... start playing.